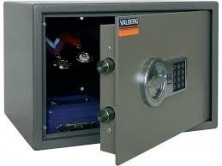 Subject: Spelling + Have got

This is an original version of the popular Hangman game. Its difference from the classic variant is the players guess the word as a whole, but not by letters.

1. If possible, arrange the game participants so that they are sitting or standing in a semi-circle in front of the doard.

2. Make sure that the players are familiar with the game of Hangman. If they are not, it would be feasible to briefly explain the general rules of the classic version.

3. Ask the players to 'pick the cipher to the safe', using different combinations.

You write the letter 'r' on the board like this:

Player A gets one point by the number of revealed letters.

You write the letters 'd' and 'e' on the board like this:

Player B gets two points by the number of revaled letters.

You write the letters 'a' and 'm' on the board like this:

Player C gets two points by the number of revealed letters.

This time, it is Player A, whose turn to come to the board and draws their guessed word with a row of dashes. Then it is the turn of Player B to make the first guess and so on. The game continues around the circle as long as each student has guessed a word and it has been revealed. At the end of the activity, the number of points, accumulated by each participant during the whole competition, is counted up. The player, who gets the most points in total, becomes the winner of the game.